Review of My Frankenstein 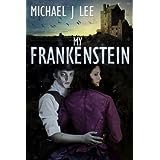 There is an art to writing for young adults. Particularly in the gothic/fantasy genre which has exploded in recent years. My Frankenstein by Michael Lee succeeds because as with all good writers for young people he does not patronise them by presenting material that is easy. His subject matter is original – instead of going along with the plethora of vampires/zombies/werewolves he returns to one of the great modern myths, the story of Frankenstein and his creature, and reworks Mary Shelley’s story for a modern, teen audience. He is also strongly influenced by film versions of the story. Lee takes some liberties with the original story, as expected, but what impressed me was the fidelity to Shelley’s original themes and his expectation that his young readers want some depth to their reading.

The story’s main protagonist is Eva who lives in a village near Castle Frankenstein. Baron Frankenstein returns to the village determined to create a new, industrialised society. He recognises Eva’s intelligence and she becomes his protégé. At the same time he is engaging in his dreadful experiments. Eva falls in love with the charismatic Baron but their relationship is problematic as she is an independent and moral young woman who perceives deep flaws in his character. She is introduced to and becomes the tutor of Frankenstein’s “cousin”, Adam, who is horribly disfigured. Throughout much of the book the reader knows more about what is happening than Eva does and Lee uses the reader’s extra-textual knowledge effectively. There are also some neat moments such as Adam’s relationship with Eva, which recalls the film The Elephant Man.

Shelley’s philosophical and social comment remains intact in My Frankenstein: the irresponsible scientist who is driven by power, not morality; the appalling social and environmental effects of rampant industrialisation, particularly dehumanisation; society’s mistrust and hatred of the “other”; the unforeseen consequences of technological change; hubris versus humanity, and the classic gothic theme of what is monstrous.

The novel is an exciting and dramatic read, at times quite confronting for its intended audience, and an original reworking of its source material.