In my stories characters don’t simply have challenges or problems to overcome, but they are faced with crisis. The initial crisis usually reveals underlying problems which surface and become crisis in their own way. The importance of this approach to writing, particularly relating to dark tales, was confirmed in a critical study of Clint Eastwood’s films which argued that he operates in the same way.

Once again, I cannot overstress the necessity for fiction writers to read widely, both fiction and non-fiction. Writers benefit from engaging in research and their reading material must be serious and not simply a diet of junk. I don’t suffer from writer’s block because as with your health prevention is better than cure and reading widely is an investment in the quality of your work. Likewise, I’ve find that once the manuscript is approaching the final stages the writing isn’t finished. The writer is faced with creating a pitch, blurb, synopsis and a book description. These are unavoidable whether you are self-publishing or sending your manuscript to a publisher. For example, a self-publisher needs to articulate a clear brief that reflects the work so the graphic artist designs not only a striking cover, but one that resonates with your creative aims. 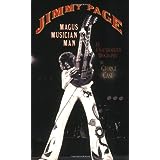 Apart from my interest in Led Zeppelin as musical geniuses, reading is an essential part of the writer research component of my writing. I am currently working on a final draft of a story titled The Lester that combines music and the supernatural. Without committing to reading widely I don’t believe that I could write fiction.

I am reassured by this being an “unauthorized” biography as it has not been impinged upon by the subject or his minders. Case has been scrupulous in his research and his presentation of Page as a musician and band leader. The “magus” in the subtitle is a bit misleading as there is not much about Page’s involvement with magick – the Crowley and Anger connections are not dwelt on. Instead, Case presents Page’s “magus” qualities as inherent in his music and in the band’s profound influence – at the time and over the years.

Page’s musicianship, as a guitarist naturally, but also as a producer and arranger, is a key element in the story. Case is also a musician and so we are given plenty of details about the musical aspects of Page’s guitar work and in the studio. This material will interest musicians and those looking for a story that goes into aspects of Page’s and Led Zeppelin’s legacy that moves beyond stories of sharks and similar debauchery. Not that Case elides this kind of material. The band’s artistic decline is placed within the circumstances and events of the time.

While factually there may not be much that is new here, Case’s book is important because he analyses his subject. Their grinding schedule of recording and touring caused Page “psychic dislocation…from which he would never recover”, according to Case. He offers considerable insight into Page’s and the band’s triumphs and tragedies.

When Publishing Services Fail to Deliver

I am currently reloading my book titles up to kindle after terminating an unsatisfactory distribution agreement with a large Australian distributor.

The publishing services provider I originally engaged to convert my novel from a word document to epub and mobi files has sent me corrupt files. As I am unable to view the text for In Jeopardy and upload it to Kindle the novel is only available as a pre-order on kindle until late October. I am in the process of arranging another provider to convert my original manuscript to a mobi file.  In Jeopardy will appear as a revised version which will also include a new cover. I believe this will more closely evoke the protagonist’s plight and more aptly reflects the grim tone of the story.