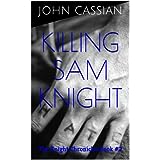 I have posted 23 reviews on Amazon and my recommendations have helped 33 readers.

Even the most lurid gore and perverse sexual behaviour can pall with repetition. But here, again, Cassian deals with his subject matter with flair and imagination – perhaps too much for readers like myself. The novel moves at a cracking pace. It is one of the few books I’ve read recently where I have not felt the need to skip a few paragraphs until the action picks up again. This is a non-stop thriller. The plot has some amazing twists and turns and some mind-blowing moments. For instance, I was particularly struck by the introduction to the plot of the serial-killer fan websites and the content therein.

Four stars for Killing Sam Knight because it was, at times, a bit too graphic for me. This is of course a matter of personal taste, other readers may be more comfortable (!?) with this. I look forward to the next book in the series.
www.lynettemcclenaghanauthor.com