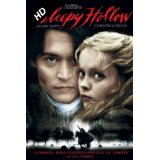 As stated in previous blog posts, reviewing text, film and music is an essential component of a writer’s research work.

I write and review material outside my genre in an attempt to avoid becoming a clichéd supernatural, horror writer, but rather one that speaks to a broader audience. As traditional Gothic, Sleepy Hollow fits into my genre of writing. Reviewing works within my genre helps inform and define my own work.

From my experience as a teacher and private tutor, students struggle with general analysis of text, and more so with a text comparison. The style of this particular review includes a literary comparison and serves as an appropriate model for senior secondary students. One of the tasks years 11 and 12 Literature students are required to do is compare the original text with an adaptation of that text.

Review and literary comparison of original story and film adaption

Washington Irving’s short story, Sleepy Hollow is traditional American Gothic. It opens with creating an other-worldly setting. Burton’s film adaptation recreates this by using washed out lighting and grey muted tones. This enhances its sense of otherness, giving Sleepy Hollow a sense that it is cut off from the rest of the world. Despite Sleepy Hollow’s bleak atmosphere, the original story and the adaptation present a lavishly decadent place that has shades of Poe’s literary landscapes. Ironically, set in 1799, the story predates Poe’s work.

One of the most obvious differences is the contrast between the two artists. Irving’s literary style is ornate, evocative, well-crafted and a delight to read. Burton creates unease by using music and sound effects that add to the eerie and sinister tone of the film. Cinema effects are haunting, fantastical and include the darker side of fairy-tale elements which add to the surreal Gothic quality of the film. Typical of Burton, he applies cartoon exaggeration which amplifies the bizarre, but also serves to lighten the horror and gloom. For example, Ichabod Crane’s bizarre apparatus features alongside graphic decapitations where a number of heads roll in gruesome slapstick.

The movie adaptation easily identifies with Burton’s other work, but underplays Burton’s usual quirky and kirsch humour, replacing it with a darker humour.

Another contrast is Irving’s reference to the natural world identifying the place and story amid the primitive and sparse world of the frontier where sounds surpassing those of nature are unsettling, reminding the reader of Sleepy Hollow’s desolation, a place where spooks and ghouls lurk. Burton’s version of Sleepy Hollow is like a costume drama that identifies with 18th century New England. However, it is also a louder and more rushed world where character and place identify more readily with modern audiences.