I often mention in my posts that part of my research as an author involves reading the works of other writers including other Indi authors. 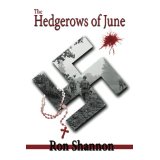 The Hedgerows in June It’s late June 1944. The allies have invaded Normandy and Chris Weymouth, an allied spy, has been living in a French village at the edge of the Bocage playing piano in a local cabaret at night while passing bad intelligence to the Germans. He has been expecting orders to leave at any time but is taken aback when they are delivered by a young Catholic nun named Sister Mary. Sister Mary however, is much more than her habit and wimple, she has her own secrets too. She informs Chris that he’s been ordered to help her transport four young children across the dangerous French farmland known as the hedgerows to St. Lo. Espionage, passion, intrigue, and danger surround them on all sides as they head directly into one of the bloodiest battles of World War II, the battle of the hedgerows!   Plausible depiction of the horrors of WW11, which translates into a rollicking and compulsive fiction read The Hedgerows in June is more reflective of a 4 ½ star rating. The story snaps into action from the opening paragraphs, drawing the reader into the turmoil, dangers and horror of World War II. Although the story reads as a creative non-fiction, it includes the drama, tension, suspense and mystery you’d expect to find in a thriller. Another plus for The Hedgerows in June is that it appeals to a wider audience. It has all the key elements of a historical romance without becoming melodramatic or sentimental. Ron masters romance without putting off non-romance readers. The traditional story structure works well with The Hedgerows in June, where use of flashback blends well into the story, which helps to create suspense and alludes to the tension between characters. However, I would have liked to have seen some of these flashbacks developed a bit more and overlong scenes contracted. Despite the romance that develops between two key characters, Ron doesn’t whitewash the grim realities of war. This is sustained by Ron’s brooding and well-crafted settings that evoke a sustained sense of threat and menace. The killing and blood that erupts as Chris, an allied spy, Jean Claire, an old war veteran, Sister Mary and their charges traverse the killing field’s keeps readers on edge. The mud, the dirt and a number of the surprises they encounter, including the gripping finale sustain reader interest right to the closing scene.