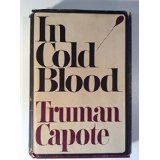 Another recent favourite is Truman Capote’s short story Tree of Night. This is a chilling gothic tale that works by implication and subtlety rather than graphic detail. This tale leaves a lingering sense of unease long after closing the book. This work is a reconstruction of a true story, a brilliant read and excellent example of creative non-fiction. Capote skilfully takes raw factual material and transforms it into compelling fiction. Like all good literature there are stories within stories, sub-plots and flashbacks. He based much of this work on interviews with two criminals who committed a monstrous and almost motiveless murder and turned this narrative into a multi-narration. This non-fiction text draws on fiction techniques. It’s a detective story with a distinct Gothic flavour and can be seen as modern horror. In Cold Blood is a multi-dimensional and complex read. The contrast between the Clutters, an all American small town family, and the murderers who are callous and self-centred is stark. This is high-lighted by the monstrous manner in which the murderers torture than hog tie each member of this family before killing them. Despite the grim tone that Capote sustains his prose is mesmerising and poetic. Surprisingly and although the chilling monstrosity of this crime and the murderer themselves, Capote manages to enlist reader understanding of two ostensibly brutal, but complex characters. Possibly the most chilling aspect of Perry and Dick, the murderers, is that many of the ordinary Americans who encountered this pair, were easily charmed and fooled by their deception. No reader interested in modern literature can afford not to read one of the best books ever written.