From the opening lines Ray’s autobiography is imbued with a personal touch which contrasts Mick Wall’s cynicism. 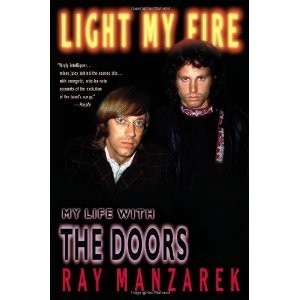 The prose is liverier, more intellectual and well crafted. Ray’s melodramatic style, turns of phrase and references to the 60’s evoke an authentic account of this revolutionary time. Ray brings Chicago to life, where he grew up, painting a portrait of the 1950’s street scene. He makes reference to blues influences that partly shaped The Doors’ music and discusses music elements in a way non-musicians can relate to. With the master of a story teller and scholar, Ray draws in an audience far greater than Doors’ Fans. He shines a light on the group’s artistic background, education and cultural influences, which were a step away from the poppy world of The Beatles. No group had even done what The Doors were doing. Furthermore he defends his friend Jim Morrison without whitewashing him. Jim was more maligned than a scourge some accused him of being and humble despite fame.

Ray acknowledges that along with the band’s fame they ‘entered the gates of Babylon.’ However, songs such as, Strange Days, gave voice to non-conformists, the art world, avant-gardes and those who didn’t fit mainstream society. Educated, literary and well-read, Ray and Jim are evocative of artists like Scott Fitzgerald. For example, they were thrown out of Whiskey-a-Go-Go, after Morrison sang, The End. One of the proprietors ‘went ballistic’ accusing Morrison, and The Doors as base and immoral. Ironically the song was a tribute to Oedipus Rex where Morrison’s lyrics made the political point that American fascism is just as barbaric and crude as Ancient Greek society. Today some can relate to the triumph of the right with its neo-liberal rot.

The Doors shone a light on American authoritarianism and the expectation of compliance. Bill Siddons said, ‘They didn’t take out warrants until yesterday. If they arrested Jim at the gig there would have been a riot.’ The arrest and prosecution of Morrison was a beat up because he hadn’t actually done anything wrong, he simply represented the counter-culture. Ray rambles at times and inserts many esoteric references, which may put some readers off. Despite some short comings Light My Fire is a great read.