Today I watched, It Follows, a traditional horror film. The main idea is that an entity follows people and kills them. You become pursued by the entity once you have had sex with the person who is currently being pursued by it. 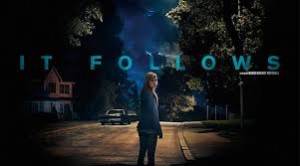 This movie is similar to M R James’s short story: Casting the Runes. There are a number of dramatic and frightening scenes, particularly the opening. Throughout much of the film the tension and terror is sustained and keeps you on the edge of your seat. However, there are times when the story lags, and the ending is a bit glib. Much of the action takes place in abandoned and derelict, former middle-class areas. This feature adds to the theme of social decay. The horror is driven by the necessity to have sex with another partner in order for the entity to shift its attention from that person being pursued onto the unwitting new sexual partner. A key theme of the film is how people are treated as objects and ends in themselves, where sexual encounters are used to emphasis the idea of victimization and callous disregard for the welfare of another person. When, Jamie, the protagonist is the latest victim in the chain, unlike those who predecease her, she is supported by friends. Jamie is torn between the moral choice of infecting or not infecting another person. Her attempts to escape her fate show that the source is anything but predictable. Sound effects and camera work emphasis the horror, but there are also some humorous moments. One of the movie’s strengths is that it appeals to a wider audience than simply horror fans. This is also a tale about young people growing into adulthood and discovering the awfulness of the world and the importance of looking out for each other.